THIS SHOW HAS HAPPENED ALREADY!!!  BUT, YOU NEVER KNOW, IT MIGHT RETURN AGAIN AGAIN!!  FOR NOW, YOU CAN READ WHAT IT WAS ALL ABOUT

Also, Theatreview thought it was “MACABRE MADE MISCHIEVOUS”
While Artmurmurs’ reviewer said “I had a lovely time“

Everyone knows Edgar Allen Poe died mysteriously in Baltimore in 1849. But recently a trunk of mysterious papers was discovered by the same researchers who previously discovered the Lovecrafted archive (revealed during the 2019 Fringe). Did the forty year old Poe fake his death, flee to a remote island nation and live out the rest of a long life writing epically gothically tragically romantic stories shaped by the myths and realities of life among the phlegmatic people of the farthest flung corner of the British Empire??

Find out as each night a different narrator channels the tortured author to bring original improvised tales to Te Auaha’s Tapere Iti stage.

“The show will be a romp through a gothic past” says Ali Little, the show’s creative director. She claims the tortured author, a man who spawned so many many tortured imitators, has communicated to her through ethereal means.  And he is “delighted, just delighted” that these tales which should have been part of his oeuvre, now will be.

Visit the FRINGE for tickets and a bunch (a slew, a cascade a cornucopia) of other great shows,  WIT’s Facebook for the latest details, team photos and gossip about this show.

“As a troupe, they boast an effective and playful onstage chemistry” ~ Theatreview

THIS SHOW ALREADY HAPPENED. BUT IT WAS FABULOUS AND WE’LL DEFO DO IT AGAIN IN 2020

Like an improv jam, only hotter and more meaty!

Hosted by the Wellington Improvisation Troupe (WIT), daring teams of improvisors from troupes and groups from around Wellington will strive to create amazing scenes, sing tuneful songs and build bold stories before your very eyes. Some groups are of long standing, others will form on the night! The most reckless will choose to face Challenges from The Hat.

If you’re an improvisor (or a team of improvisors), please contact WIT through Facebook, and you’ll be sent Further Instructions on how to grasp your time on stage!

Visit the Facebook Event Page for the latest details, team photos, gossip and the rest.

“If you’ve ever enjoyed a heaped helping of cheesy retro cinema goodness, this should put a grin on your face ”   Theatreview

WIT brings you an improvised show following the classic elements of B-Movies. Join our unsuspecting cast, as a series of unfortunate events lead them to a horrifying discovery… who will survive? Who will find love? And why is the phone always dead when you need to call for help?!

The story will be shaped by suggested movie titles given to the cast by the audience – see what we create for you!  This is a special Halloween edition, and will be fun for adults and older children who enjoy the schlocky end of comedy horror.

This will be the only Attack of the Killer B-Movie this year!!

WHEN:  Sunday October 27th, 7pm
WHERE:  The Powwow Room*  74 Courtenay Place, Wellington
*nb this is a fully licenced venue so under 18s need their grownups and youthful looking grownups need their ID

Visit our Facebook Event Page for the latest details, show photos, cast gossip and the rest. 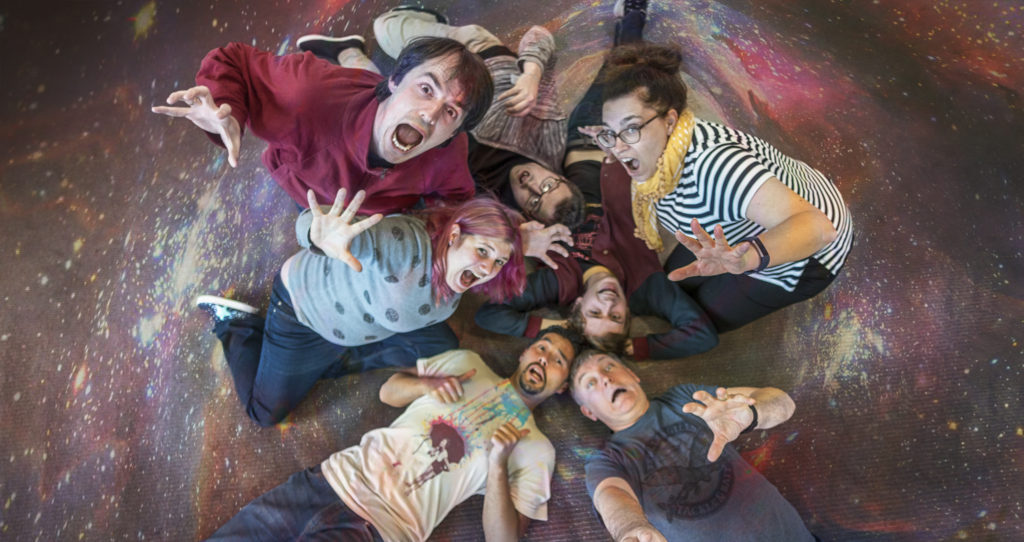 Beloved improv elimination competition Micetro is back for another bite of the cheese.  Last time  Lorraine was crowned the Greatest WIT in Wellington.  This time . . . well, there will be challengers.

A crew of eager improvisers will again battle head to head using wit, spur-of-the-moment storytelling and risking everything for an the love of the audience.  There’ll be songs!  Drama!  Pathos, bathos probably a bit of logos!    A mix of seasoned improvisers and adorable newcomers and everyone in between will play their hearts out to decide who gets eliminated and who survives to be crowned ‘Micetro’.

All profits from the night go to support  Rare Disorders NZ – whose mission is to support, assist and promote better health care and wellbeing for patients and their families/​whānau living with a rare disorder in New Zealand

Sometimes delightful new improvisors sweep into town and fit charmingly into a troupe. We know Mark arrived recently on some mysterious geographical excursion from Dorset,  but at the same time it’s like he’s always been here.

THIS SHOW HAS HAPPENED!
Lorraine won, and $145 was donated to Kidney Kids NZ
There’ll be another Micetro Soon

Beloved improv elimination competition Micetro is back for another bite of the cheese.  Last time Mike Webster was crowned the Greatest WIT in Wellington.  This time . . . well, there will be challengers.

A crew of eager improvisers will again battle head to head using wit, spur-of-the-moment storytelling and risking everything for an the love of the audience.  There’ll be songs!  Drama!  Pathos, bathos probably a bit of logos!    A mix of seasoned improvisers and adorable newcomers and everyone in between will play their hearts out to decide who gets eliminated and who survives to be crowned ‘Micetro’.

Joel is an improviser who is no stranger to making things up in front of audiences. He has trained in and performed shortform and longform improv with theater troupes locally, in Wellington, and across timezones in Chicago and Los Angeles. No stranger to teaching improv, Joel coaches various improv teams across the city, preparing them to be fiercely unprepared.

Joel drinks a lot of energy drinks. He probably shouldn’t but he says it gives him personality.

Functionally blind, Susan lives in a world of sound, and is passionate about sharing this with others. The skills of listening and communication are vital to her life, and to a good scene. The truly exciting thing is, when you take the image out of the equation, there is nothing you cannot create onstage.

Susan is a qualified actor, who has been improvising since 2013, and is happiest without a script in her hand, which is good because she wouldn’t be able to read it.   She co-directed  Stories for the Darkest Night at the 2018 NZ Improv Festival, and played a very dubious cook in Lovecrafted during the 2019 Fringe Festival.

Lyndon brings rich shades of the thespian, clown and professional wordsmith to his improvising, and has been part of WIT as a performer and senior trainer since forever.  Most recently seen onstage in WIT’s 2019 Fringe Festival show Lovecrafted, he was the original auteur for Attack of the Killer-B movie and voice of The Rabbit in Attack of the Killer Puppets.   He is rumoured to be a furtive collector of masks and brewer of mysterious beverages in his spare time, and occasionally takes to the stage for proper plays with scripts.

No man has shinier shoes or a snazzier tophat than this man.  A performer, trainer, singer, our treasurer and an actual treasure, Mike has played in shows with WIT from Nelson to Palmerston North, although mostly in Wellington, where he’s been part of of the improv scene since 2012.    Going from strength to strength on stage, in 2016-18 he was part of the core cast of Attack of the Killer-B Movie, and in 2019 he was crowned Micetro, and played a sinisterly well-dressed janitor in Lovecrafted.