“We live on a placid island of ignorance in the midst of black seas of infinity, and it was not meant that we should voyage far” ~ H. P. Lovecraft

In 1925 young fantasy writer Howie Lovecraft fled his Rhode Island home, tormented by the failure of his marriage and other personal demons. No one was sure where he vanished to for six long months, but once returned all agree he wrote stories that were richer and darker than anything he had ever written before.

Why? Well, we now know that he took a tramp steamer to the farthest reaches of the Southern oceans, and spent those lost months travelling the length and breadth of New Zealand. He spoke to farmers and fisherfolk, and former nurses at long-closed special hospitals. Most significantly he attended lectures at Wellington’s Masseytonic University, and interviewed members of the faculty in exhaustive detail. He gathered dark tales of twisted deeds and unnatural monsters, and learnt truths that no man may learn without descending into madness. This research was woven into the warp and the weft of tales he wrote and rewrote until his untimely death in 1937, albeit with many of the place names and historical events transposed to more American locations at his publisher’s request.

Long forgotten in a dusty attic, a leather-bound trunk of Lovecraft’s original heavily annotated notes mouldered, until unverified rumours of the trove’s possible existence reached the ears of researchers from Masseytonick University. Thanks to their hard work, some at the expense of their very souls, a selection of these unheard tales will be retold as part of the 2019 Fringe Festival.

Lovecrafted! will be improvised on stage by direct descendants of those interviewed by that nervous young American. By an amazing coincidence all are members of the Wellington Improvisation Troupe.

Tickets: available as doorsales, or through the Fringe website, $10 or $7 concession/with a Fringe Addict pass.

Would you like a copy of our posters to put on your work notice board, or just to keep and admire?  Well, click right here for an A4 sized jpg file 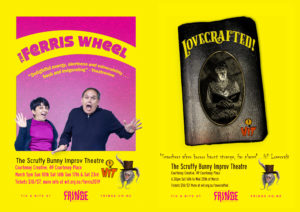 Theses courses are often is fully booked, so enroll now to make sure you don’t miss out.

The Joy is WIT’s foundation class and suitable for any level of experience.  It has been run by WIT in association with the Wellington Community Education Centre (WCEC) for over 10 years now, and classes are always led by senior WIT trainers/performers.  This term Brenton Hodgson  will be leading the Joy of Improv.

WCEC operate a pleasing smorgasbord of Adult Education classes at various community venues, including many (like WIT’s) at the Wellington High School in Taranaki St, Mt Cook.

Warm up the dark nights of winter and those chill evenings of spring with a whole bunch of laughter and revel in being spontaneous and playful.

The Next Step is for peeps who’ve completed The Joy, or who already have some improv experience with another troupe.  The focus is on becoming super stage ready, supporting your fellow players, and generally having an excellently fun time.  This is usually run after every-other Joy of Improv, so there won’t be another course until term ii in 2019.

Both classes will come together to create a fabulous end-of-year graduation show for friends and family, at The Scruffy Bunny Improv Theatre, on Sunday December 9th.

In Term 4 this will be led by Ali Little (a Co-Creative Director of WIT, also convener of the Wellington Improv Meetup, Wimprov), with some guest leaders teaching special skills on a couple of nights.

Wiremu Tuhiwai will be leading the Joy of Improv in Term 3.   The course is often is fully booked, so enroll now to make sure you don’t miss out.

The Joy is WIT’s foundation class and suitable for any level of experience.  It has been run by WIT in association with the Wellington Community Education Centre (WCEC) for over 10 years now, and classes are always led by senior WIT trainers/performers.

WCEC operate a pleasing smorgasbord of Adult Education classes at various community venues, including many (like WIT’s) at the Wellington High School in Taranaki St, Mt Cook.

Warm up the dark nights of winter and those chill evenings of spring with a whole bunch of laughter and revel in being spontaneous and playful.

Wiremu Tuhiwai will be leading the Joy of Improv (for any level of experence) and Ali Little Improv The Next Step (for people with a basic grounding in improv).  Both are running Thursday nights May 10th to June 28th from 7.30 to 9.30pm.  The Next Step group will also be putting on a graduation show on Thursday July 5th.

The classes are run in association with the Wellington Community Education Centre, which operates a delicious smorgasbord of Adult Education at various community venues, including many (like these) at the Wellington High School in Taranaki St, Mt Cook.

There are still a limited number of places left in both, so maybe it’s not too late to warm up the dark nights of winter with a whole bunch of laughter.

WIT embarked on a world-wide tour of Wellington this Fringe, with fun and festive family-friendly entertainment at a series of venues. The tour had to be cut short, but to everyone who did come to a show: we hope you enjoyed yourselves as much as we did.

If you have tickets to one of the cancelled shows, Eventfinda will refund to the credit card you made your purchase with.

If you would like an A4 poster for the pure nostalgia, here is one to print out and keep WWWT_A4poster

Set in the Dead Letter Office, where undeliverable letters are stored and filed, never to be read, until now. Postal workers read the letters inspiring fellow improvisers to create scenes, stories and characters reflecting the spirit of these words. 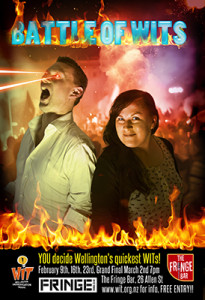 Wellington’s best loved community improv troupe is back with another glorious season of Battle of WITs, and this time you can see it for FREE! The Wellington Improvisation Troupe (WIT) want to share the love with their hometown. All the Sunday evenings of this Fringe Festival come on down to the Fringe Bar and watch teams of intrepid improvisors battle it out to be crowned the champions.

Original theatre will be made up on the spot by tireless teams formed from a frothy mix of
Wellington’s leading improvisers and some courageously adorable newcomers. Choose your favourites, and help them soar to victory on a tide of audience approval.

Director Geoff Simmons promises that each night will be an evening of spur-of-the-moment storytelling and glorious failure. He explains that improv is “sometimes serious and frequently hilarious, either way I promise each night be a show that no one has ever seen before – or ever will again”. So, grab a drink and enjoy an unrepeatable blend of improvised games, tales, songs and shenanigans.

This Fringe Festival there are no tickets on sale for Battle of WITs. There may be a hat handed round, but just ignore it if you don’t have money, or don’t have fun. 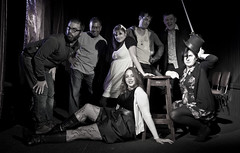 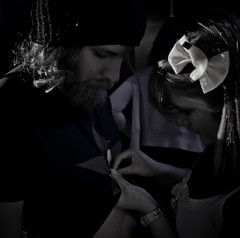 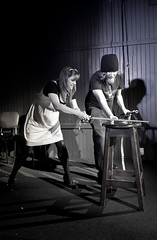 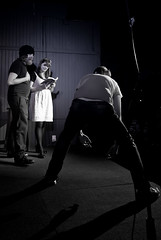 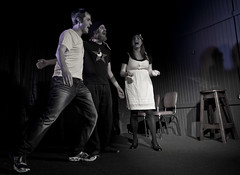 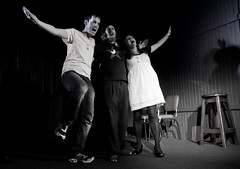 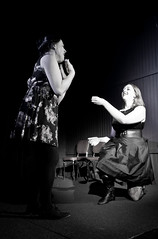 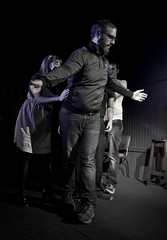 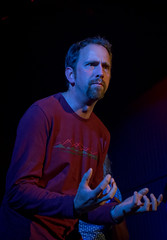 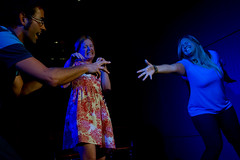 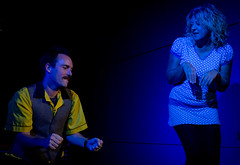 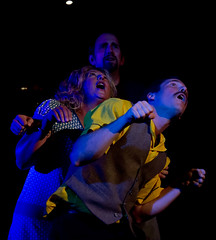 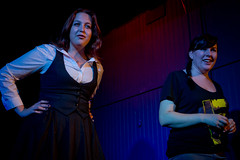 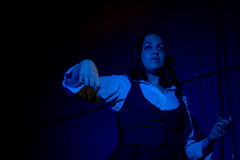 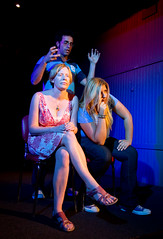 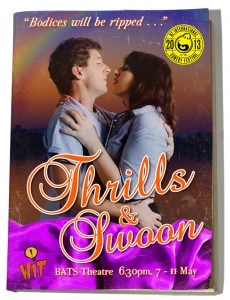 The reviewer’s conclusion on Thrills, “. . .a happy blend of celebration and satire.  Recommended “.

Quivering bodices. Dark brooding eyes. Unbridled passion. Wellington Improvisation Troupe (WIT) brings you Thrills & Swoon: Improvised Romance. Inspired by the romance novels you pretend not to read, stories and scenes will be created on the spot, as fresh as an innocent flower waiting to be plucked. From the creators of improvised soap The Young and the Witless comes more hysterical romance.

END_OF_DOCUMENT_TOKEN_TO_BE_REPLACED

Four times a year WIT runs The Joy of Improvisation, a series of classes  tailored to those who are completely new to improv or have had a break of a few years, and want to have fun learning how to improvise short scenes and stories in a safe and positive group environment.  There is an end-of-course demonstration of group exercises for family and friends.

The next course runs for eight weeks on Thursday nights, beginning at 7.30 on the 16th of May, led by the fabulous Nicky Hill.  This is run in association with the Community Education Centre at Wellington High School; enrol directly through their website.

This WIT Level 1 course is a pre-requisite for further courses and membership of WIT, New Zealand’s largest and friendliest improv community.  If you have extensive improv experience already, or aren’t sure if this course is for you, please contact us.

More about our training. 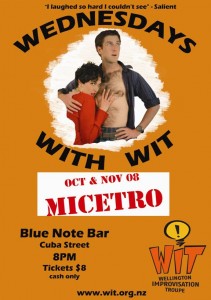 Between festivals and seasons of shows such as The Young and the Witless WIT began to regularly organise more informal nights at the Blue Note Bar (now the Fringe Bar).  These were collectively promoted under the umbrella of Wednesdays with WIT, with the name shifting to The Improv Lounge in 2012.

Shows in Wednesdays with WIT included many Micetros, Gorillas, House Team shows, The Improv Lab (itself an umbrella for a variety of shows) and more.  Many shows such as The Last Saloon and  Divas and the Beast had their first public outing at a WwW evening before going on to a Fringe or Comedy Festival season. 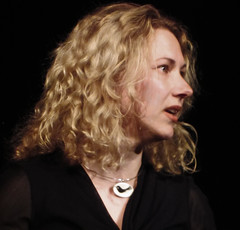 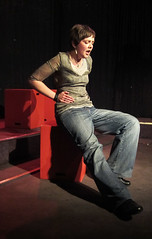 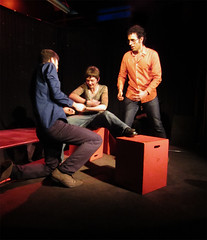 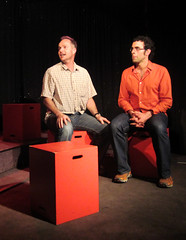 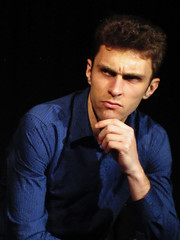 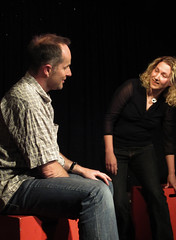 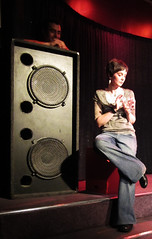 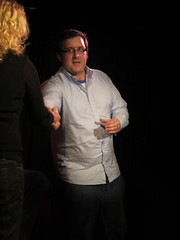 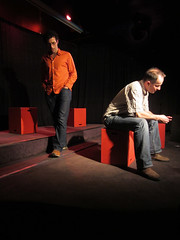 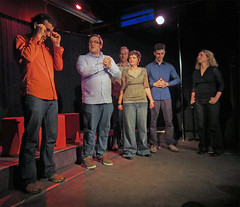