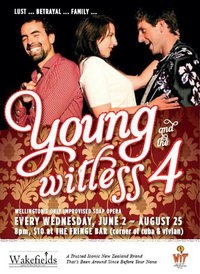 Fresh from knock out seasons of Micetro, Improv Divas, and Gods & Heroes, the Wellington Improv Troupe is back with another titillating season of intrigue, secrets and unrequited lust!

Theatreview.org commented that the show attracted “large and exuberant houses who are not disappointed as the improvisers deliver a compelling combination of narrative twists, character based gags and sardonic breakings of the fourth wall”